Let them have cake

Emboldened by Mise's off-road baking this weekend,
I decided to abandon the recipe books
and see if I couldn't add a little to the culinary canon myself.

I had an idea for a new filling/ icing combo
which would startle and impress the blog world.
So - make a regular sponge cake mix and add plenty of
cocoa powder. I can't give you exact measurements
because I was feeling reckless.
Divide the mixture unequally between two tins.
I lined them out of habit but that was just my old careful id
breaking through. You don't have to.
Don't go smoothing the mixture out too carefully,
you're aiming for a marked slope on each cake half
when it comes out of the tin.
You'll see why later.
After the usual baking time at Gas mark 4
test with a skewer and feel none the wiser
about whether it has cooked all through.
Put it back in the oven for a few more minutes.
Leave to cool and while it cools
attend to the icing /filling.
This requires that you have a catering size tin
of condensed milk in the back of the fridge
and the remains of a jar of Nutella.
Beat the two together.
It froths and turns the colour of the inside of a Mars bar.
Spread a little of this on one cake half and now,
this is the important bit -
line up your two cake halves
thin edge to thin edge
and pour the rest of the icing over the assembly.
The top half must slide a little
so that the icing can cascade over the side.
If you are doing this on a wire cooling tray
you will have to scoop the overflow back onto the cake.
Don't get any crumby bits into the icing,
you'll ruin the effect.
Et voilà 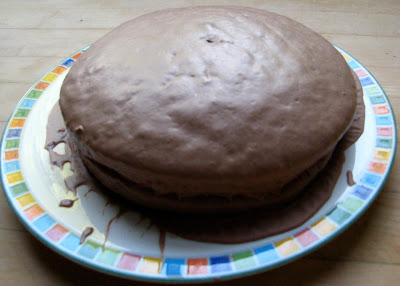 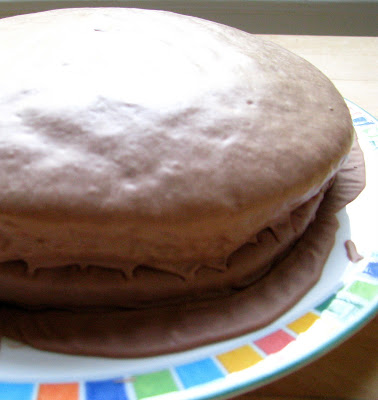 Tastes as good as it looks.

Labels: cooking, frivolity, How to derive entertainment from mundane chores