Every year the same thing happened.
At the beginning of November she made up her mind that this time,
for once, she would get her Christmas shopping done early.
She went as far as writing a list - and there,
for several weeks, the matter rested.
At intervals she tried to pretend that
Christmas Day fell on the 5th of December,
or, alternatively, that all her friends lived in South Africa
and that she had to catch an early mail;
but it was no use.
The feeling of temporal urgency cannot be artificially produced,
any more than the feeling of financial distress. 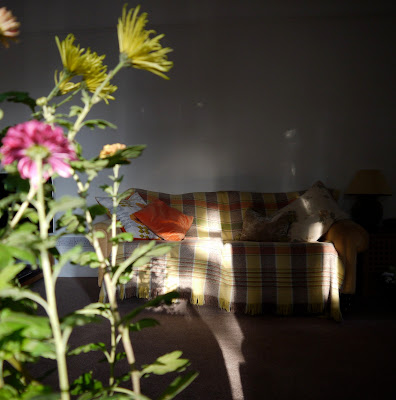 And Mrs Miniver might well have added,
that while the sun shone warmly and chrysanthemums
and geraniums still bloomed,
it was impossible to feel in the least bit Christmassy.
Conditioned as we are to expect sparkly chilled air
and a real possibility of snow,
feelings of meteorological appropriateness to the season
are vital for the accomplishment of early Christmas shopping.
Posted by Lucille at 9:47 pm