Not sending the clocks back 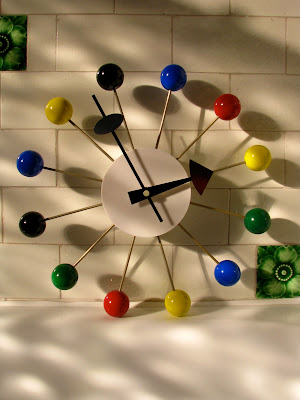 This is a George Nelson ball clock.
I am the proud owner of three of them.
I didn't actually buy three,
(even though they were a bargain price,
not now available quite so cheaply at Milan Direct),
but they sent me the wrong one and when I pointed this out
they said, with an airy wave of their hands
that I could keep it and they would send the right colourway.
So they sent the wrong one again,
and when I pointed that out, they very kindly said,
please donate it to charity if you don't want to keep it,
and they would definitely send the right colourway next time.
Which they did.

Now the last time I attempted a giveaway,
I only had one taker,
so you are in with a very good chance.
All I'd like to know is
which is your favourite time of day?
Lark or owl?