The time for sowing seeds of hardy annuals is approaching.
They can all be sown outdoors towards the middle or end
of this half-way March month
when an occasional spring-like day deludes us into a belief that winter is over -
poor optimistic us! 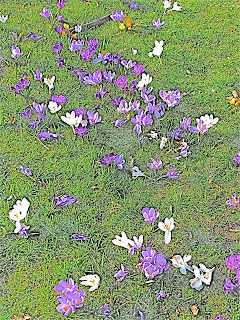 ...I would like to suggest that we might all go a bit bold and
enterprising and altruistic this year,
strewing our seeds all over the place, not only in our own prepared flower beds, but also over such waste places as railway embankments, ruined castles, bomb-sites, and even along the hedgerows of our country lanes.

Years ago, I read a book by Maurice Hewlett.
It was called Rest Harrow.
It was about a man who went walking all over the country,
sowing seeds broadcast. 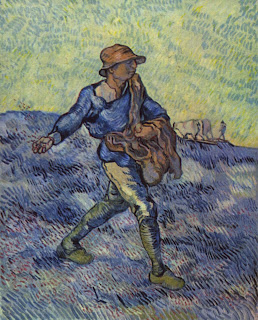 I have forgotten the detail of it,
but I know it made a deep impression on me at the time,
and I determined that if ever I got the chance
I would go walking around, scattering seeds in handfuls,
which might, or might not, come up.
It was a youthful dream; but now that I am much, much older,
and much more sadly experienced,
I still believe that we might beautify the countryside by such rash sowings.

From Vita Sackville-West's Garden Book
taken from her weekly gardening column in the Observer newspaper.

Painting The Sower by Vincent Van Gogh.
Posted by Lucille at 9:15 pm