I have been re-covering a cushion today 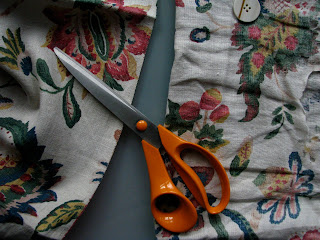 and it reminded me of a childhood story that resides
deeply embedded in my memory.
Until recently the detail was as hard to grasp as
a shard of shell in a beaten egg.
I knew it was about a cushion.
A little girl had bought it for her mother because
her back was aching.
They were poor. This is important to know.
She decided to mend it and started to remove the old faded cover.
Underneath that was another older cover, and another beneath that.
I can see the different patterns and
the colours of each successive cover.
And then beneath the next cover she hears a crackling sound.
She pulls the last layer off - and this is the spine tingling bit -
it is stuffed with money.

There is enough money to make them rich for ever.

I decided I had to try to find this book because I was sure that
if I could resuscitate the memory,
I would be five years old again for an instant.
After many years, I tracked it down -
but when it arrived - what a disappointment.
It was cheaply illustrated in red and green.
There were not nearly as many layers to the cushion
as there should have been,
none of the beautiful patterns were shown
and there was only a modest amount of money!

I gave the book away.
And now I'm going to put another cover on my cushion.

Labels: being satisfied with what you have, books, childhood, crafts, forgetting, linings