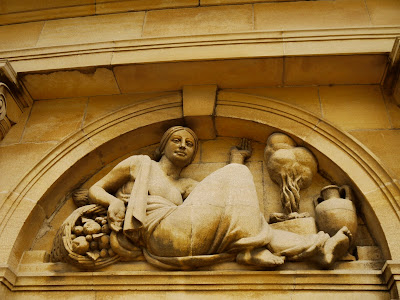 Vesta (or Hestia to the Greeks) is the classical goddess
of hearth and home.
Although she was very rarely represented in figurative form,
here she is carved into the arch over the main entrance
at Eltham Palace
the lavish Art Deco house built by Stephen Courtauld
on the site of the 14th century royal palace.

In ancient Greece the Hestian soul was put into the house
in the most literal way.
When a young woman married and set up home
her mother would light a torch at her own household hearth
and carry it before the bride and groom to their new house,
lighting their new fire with it.

A similar custom can be found in Russia, where the household
spirit of the hearth was known as a domovik.
If the family moved house, they would carry brands
from the old stove and light the stove in the new house from them.

She is a sociable goddess: she presided over the preparation of meals
and the first mouthful of the meal was always
consecrated to her. In Roman times, 'To Vesta' was a common grace.*

Eltham was self-consciously luxurious.
In winter the rooms were if anything regarded as too hot.
All the baths could be run at the same time if necessary
so that guests could dress for dinner in comfort.

Cecil Beaton wrote in Vogue in 1933:
'The clock strikes, and there is a cocktail to impregnate one
with energy enough to move from the depth of the sofa,
to climb the stairs, and then there is the
extravagance of soaking in a bath cloudy with salts. 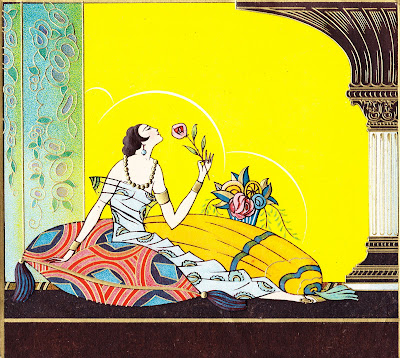 Queen Elizabeth the Queen Mother paid a private visit
while still duchess of York on 12th July 1936.
She commented that she thought the modern part
a little overdone - but it was all very interesting,
and 'my goodness what a good feed we had!
And good champagne!'

It was a 1923 Veuve Cliquot and the menu
consisted of:

Even if you visited at teatime (4.30)
you could expect to be well warmed and fortified.

Mollie Butler (1907-2009) who married a Courtauld cousin
recalled arriving one Friday in the late 1930s to have,
'an enormous tea, with muffins and crumpets and everything.
And Ginie always had a tiny little bottle of brandy
on the tea table which she put in people's tea.'

The secret to a long and merry life perhaps.

* Spirit of the Home by Jane Alexander.