Putting my feet up... 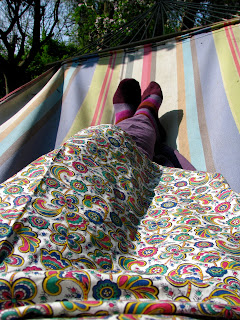 metaphorically speaking.
Actually I went to The Summer Exhibition
at the Royal Academy
with my friends Bridget and Belinda.
We had a spot of lunch first.
We were just too late for breakfast but one of our party
fancied the eggs Benedict from the breakfast menu,
and a polite request for it was successful.
All was going swimmingly until
music started abruptly,
from a speaker positioned at ear-shattering level.
It was frantic, moody, pounding piano.
Chopin perhaps.
The Sonata No 2 in B flat minor would give you an idea.


Now, don't get me wrong, I love Chopin,
but not when it's an unordered side dish
(chilli con carne in this case)
for my ham salad.
The mood of the room changed instantly.
Indigestion threatened.
We frowned and muttered amongst ourselves for a bit
and then we asked if the music could be turned down,
or even better, off again.
The response was inconclusive.
Meanwhile disembodied applause rang out across the dining room
as the performance at the invisible concert ended
and Chopin morphed into Mantovani.
No better really.
A bit like getting treacle pudding
dumped on top of the ham salad.
More beckoning and firm but courteous words
from Belinda, and the matter was settled.
Silence fell. Bliss.
We were not lynched by the other customers demanding
that the music be turned back on.
We heard only the murmur of civilised conversation
and the clatter of forks and spoons*.

Then we went into the mercifully silent exhibition.
It is interesting to imagine the potential
for dissonance between say,
Tracey Emin and Purcell,
Elizabeth Blackadder and Mahler,
Edmund de Waal and Glen Miller.
At the very least music would surely start to impact
on your feelings about the piece.
It would intrude.
And that's what it did to the food.

* the title of Richard Corrigan's cookery book.
Posted by Lucille at 9:59 pm