We have important visitors coming from Japan
a week tomorrow.
There is much to do and this pinny 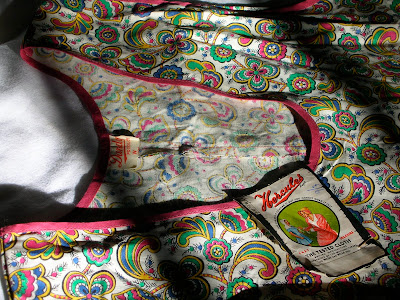 is clearly the appropriate garb,
for the efficient accomplishment of these labours. 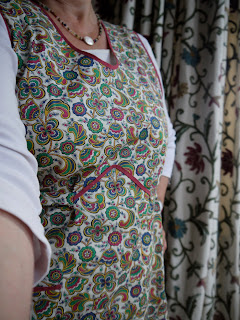 Many lists have been drawn up and a preliminary shop
is the first task of the day -
mirin, soy sauce, ramen, sushi rice,
tofu, wasabi, rice wine vinegar.
I know they will try to like Western food,
but I'm happy to provide some familiar faces.

So far so good.

Then to acquire a laundry basket, a bedside lamp
and a biscuit jar for those awake and hungry at unfamiliar times.
One out of three successes there.
The biscuit jar fell to the tiled hall floor
as soon as we crossed the threshold, 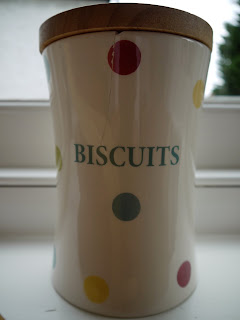 and the lamp was missing a vital screw.
I fixed the lamp with a spare screw
from the tool cabinet in the garage 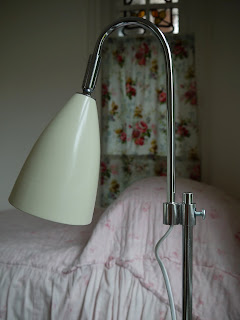 but that is where things started unravelling.
Washing lines beckoned,
windows needed cleaning,
and whilst I have the squirty bottle why not do the mirrors too
and those pictures leaning against the wall,
find a space to hang them them
and clean their dirty glass,
start supper, boil some potatoes for a fish pie
(because it's fish pie weather again),
return to the high windows with a ladder
because a swivel chair is not a good idea,
I see that now, but it's only a tiny bruise,
get a close up view of a glass lampshade
with its mini-mortuary of dead flies,
dismantle it with difficulty,
spot the discarded screws from the lamp-fixing exercise,
take them back to the garage,
turn a deaf ear to everything
calling and hollering in the garage
and hurry out to be reminded of the washing line
by an impending shower,
rush in and hear the potatoes boiling over,
catch sight of some scarves put to soak.
By whom? When?
Remember the hanging baskets by the front door
and water them in the hope
that they will last until next week.
Water cascades off the parched soil
onto my shoes.
Pick beans for supper but get arrested
by the sight of this creature - 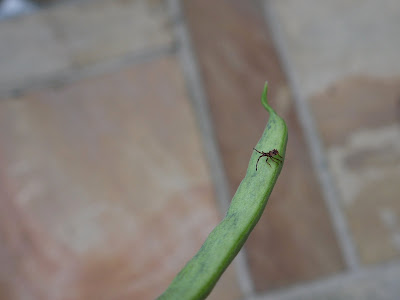 unlike anything I have ever seen before
and must be photographed and identified. Anyone?
Books fail me, so resort to Google,
and whilst here decide to have a little sit down
and attempt a blog post but
Blogger refuses to save and logs me out
deleting everything I have written thus far.

I tear the pinny off, eat large quantities of fish pie
and peanut butter fudge and start
all over again.

Edited to add:
And the job that fell off the conveyor belt?
The lightbulb in the bathroom
which, as I discovered later that night,
I had failed to replace in its holder.

Labels: cleaning, How to derive entertainment from mundane chores, the Labours of Hercules, tidying up