Christmas in a certain house

I will set down here exactly what Christmas still is
in a certain house in England, how it is observed,
and all the domestic rites accompanying it
in their detail and warmth.

Of the long oaken table from out of one of the Oxford colleges
when the Puritans looted them three hundred years ago...

This table, roughly carved at the side,
has been polished with wax since it first began to bear food for men,
and now the surface shines like a slightly,
very slightly, undulating sea in calm.
At night the brass candlesticks (for this house is lit with candles,
as the proper light for men's eyes) are reflected in it
as in still brown water;
so are the vessels of glass and of silver and pewter,
and the flagons of wine.
No cloth is ever spread to hide this venerable splendour,
nor, let us hope, ever will be.

Now the way Christmas is kept in this house is this:
On Christmas Eve a great quantity of holly and laurel
is brought in from the garden...
This greenery is put up all over the house in every room
just before it becomes dark on that day.
Then there is brought into the hall a young pine tree,
about twice the height of a man, to serve for a Christmas tree,
and on this innumerable little candles are fixed,
and presents for all the household and the guests
and the children of the village.
It is at about five o'clock that these last come into the house
and at that hour in England, at that date,
it has long been quite dark; so they come into a house
all illuminated with the Christmas tree shining like a cluster
of many stars seen through a glass.

They are each given a silver piece and after that
they dance and sing songs then visit the crib,

And here, again, tradition is so strong in this house
that these figures are never new-bought,
but are as old as the oldest of the children of the family,
now with children of their own.
On this account, the donkey has lost one of his ears,
and the old ox which used to be all brown
is now piebald, and of the shepherds,
one actually has no head.

Then the people of the house,
when they have dined, and their guests, with the priest
who is to say Mass for them, sit up till near midnight.

Then the great oak Yule log is brought in.

and the rule is that it must be too heavy
for one man to lift;
so two men bring it in from outside,
the master of the house and his servant.
They cast it down upon the fire in the great hearth
of the dining room, and the superstition is that,
if it burns all night and is found still smouldering in the morning,
the home will be prosperous for the coming year.

Next morning they sleep late,
and the great Christmas dinner is at midday.
It is a turkey; and a plum pudding,
with holly in it and everything conventional,
and therefore satisfactory, is done.
Crackers are pulled,
the brandy is lit and poured over the pudding
till the holly crackles in the flame
and the curtains are drawn a moment
that the flames may be seen.
This Christmas feast, so great that it may be said
to almost fill the day, they may reprove who will;
but for my part I applaud.

Extracts from
A Remaining Christmas
Stories, Essays and Poems
by Hilaire Belloc,
given to my mother by my father for Christmas 1965. 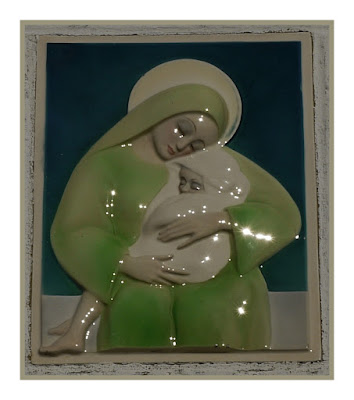 This plaque is thought to have been commissioned
by Hilaire Belloc's daughter-in-law
when she had the house built for herself.