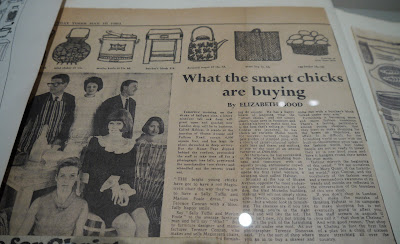 and I certainly couldn't afford a Tuffin and Foale dress,
but the article was right,
Habitat did reach out into suburbia
and I was able to get my fix of
stripped golden pine and chicken bricks eventually.
I still have the butcher's block 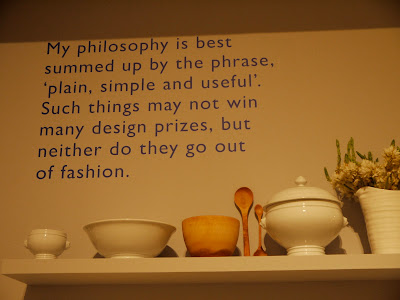 and the soup tureen,
although lately I have been planting hyacinths in it
as transferring the French Onion Soup into it from
the Le Creuset is just too much trouble.

In the rather sparsely labelled exhibition,
The Way We Live Now at the Design Museum,
they were marking Sir Terence Conran's 80th birthday.
What a busy man he has been.
See here for his own not quite comprehensive list -
he omits to mention writing his many books.
His cookery book is well thumbed on my shelf.
Elizabeth David was his guiding light.
He opened a restaurant in Neal Street,
Covent Garden in the early 70s
and we went there for our lunch on our wedding day. 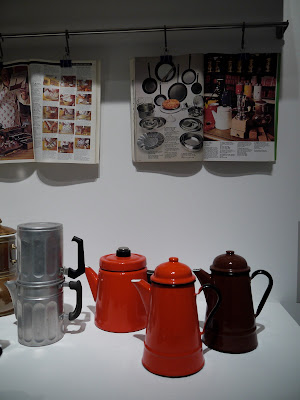 The new Habitat catalogue was eagerly awaited
and pored over.
Cork mats, bean bags, duvets
and cheery enamel coffee pots
were all so wantable.
There was, as the article said,
'a feeling, particularly among young shoppers,
that they want to make shopping for the home
an impulsive, gay affair.'

If only I had been consulted,
I could have helped them with the curating of this exhibition,
and not only with my pertinent reminiscences. 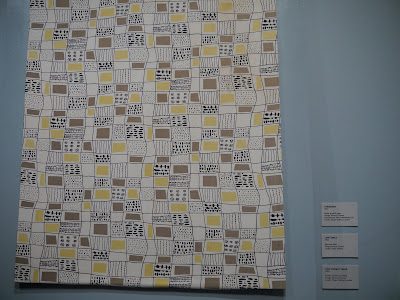 They displayed one of his original fabric designs for
David Whitehead,
and I just happen to have a copy of
House and Garden from April 1953 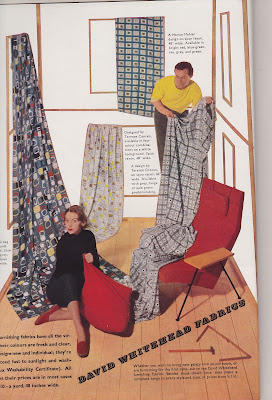 in which it is advertised.
Posted by Lucille at 5:47 pm