I was lucky enough to go to a kindergarten
that fostered an appreciation of each season.
Nature tables were preceded by nature walks
through open fields now overbuilt.

We germinated runner beans in snug
cocoons of pink blotting paper
coiled into jam jars.
About now we would sit a fat hyacinth bulb
in its jar and hide it in the cupboard. 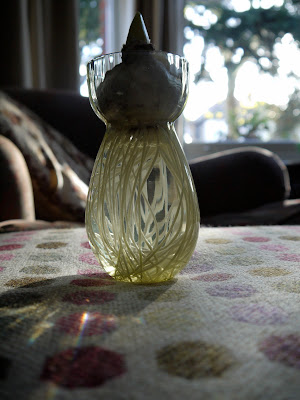 Most of the classrooms were just the
large reception rooms of an old house
and on each landing there was a grandmother clock,
which, should we need to go to the indoor loos,
we had to run past.
They had faces and anything might be hiding in the long case.
The bookshelves smelt peppery and I quickly exhausted them.
Only Greyfriars Bobby was left to read
and I knew better than to open that.

In the basement kitchen, Minnie the cook
laboured over the boiling cabbage,
and set out the milk crates with 1/3 pint bottles for break time.
I went home for lunch and was spared the cabbage
and the after lunch sleep, but there was no escaping
the slightly curdled milk on a warm day.

The bread man called at the back door
with his basket of loaves
and called me Lucinda.

Fire drill meant climbing out of the huge sash windows
into the front garden.
One of the classrooms was outside in a pre-fab
and the walls were soft gloss painted asbestos boards.
The main block of miniature toilets
was no more than a glorified shed
smelling wonderfully of creosote.
The Health and Safety brigade would have had conniptions.

There was a rose garden with a stone bench
(on which we sanded and smoothed our hands)
and an arbour of New Dawn.
A slope in the lawn was there for rolling down
in our brown gym slips.

The formal playground had three graduated metal climbing bars
on which we dangled and perched,
two legs over and swinging forward terrifyingly
towards the unforgiving tarmac,
or for the more circumspect, one leg hooked over
and swinging backwards which for some reason
was called a strawberry basket.

There was a sand pit and a wildly dangerous rotating see-saw.
One new girl was a fast runner and we would call her:
'Dido!' 'Dido!'
'Come and push us.'
And she did. With her skinny legs and her skinny plaits.
But one day she tripped and fell and was badly hurt.
We spun giddily over her prostrate body.


We had 'News' once a week.
You could bring 'Showing News' or 'Telling News'.
One girl brought a different foreign doll
from her vast collection each week.
You waved your hand urgently to be chosen to go up.
I waved my hand stretched as high as it would go
and never expected to be chosen.
Fatally one day, I was called to front.
I had nothing to say and nothing to show,
but I fished desperately in my blazer pocket
and found an elastic band.
I produced it with a flourish.
'It's magic,' I said.
'It will fly to the back of the room and return to me.'
The class looked impressed.
Miss Macpherson looked dubious.
I pinged it and it landed at my feet.

Miss Marjorie Butler was tall and gentle.
She gave me mental arithmetic sums to do
because I begged her to on walks.
She read to us and let us draw.
I remember loving Carbonel by Barbara Sleigh.
I never wanted it to end.

And what has opened these flood gates? 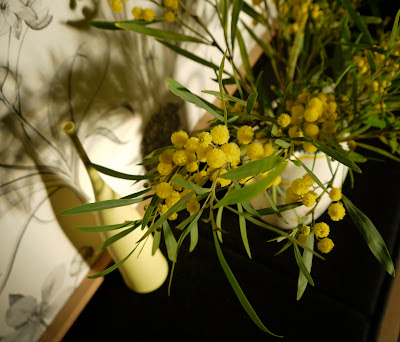