Rumer and I talk interior design

Rumer Godden has just moved again,
this time to the Dower House of Dale Park in Sussex,
high on the edge of the Downs.
She has left London on the orders of Doctor Foster
after three bouts of pneumonia.


There is so much space and air, fresh downland air,
that I ought to get well.

The first thing I try to do anywhere, in any house
is to make it into a home;

It is just post war. She buys a utility sofa and armchairs.

I had no coupons, there was nothing to cover them with
until I saw some mattress ticking
which did not need them; it was striped pale grey and blue;
a dressmaker in Arundel made loose covers of them piped with blue;
they went well with the walls Mr. Green had painted for me,
the same palest blue of the mews, my hallmark in a house.

The turquoise Kerman carpet did not even cover the floor
but its colours shone in the space;
the Agra rug was hung on the wall -
it was too precious to be trodden and,
with the sofa tables from London -
I could now use the large one entirely for writing
and had bought the miniature one as an occasional table -
the sitting room looked well even if the rest of the house was bare. 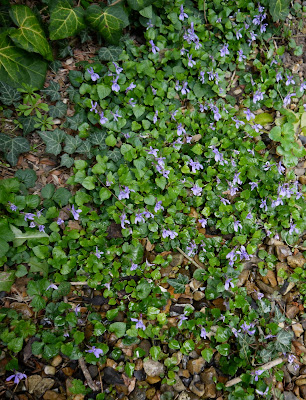 On March 1st 1947 she writes to her sister Jon in Calcutta:

The whole place is so lovely now that I ache;
there are drifts of violets so that the woods are blue in great patches,
why do violets look mauve near to and blue far away?
There are cowslips and primroses everywhere.
The garden has been sweet with narcissi and daffodils
and grape hyacinths;
it has lilac in it and a pear tree
and a laburnum. 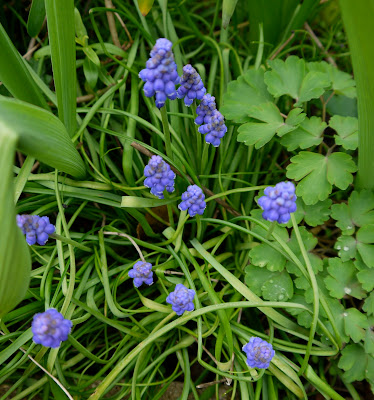