The Twelfth of August

Mrs Miniver has driven up to Scotland
for the start of the shooting season.
She declines to walk the steepest beats above the hill loch
and rests on a grassy knoll with her sister-in-law Susan,

who had planted her back firmly against one of the rowans
and begun to knit.
'Susan', said Mrs Miniver,'where did that knitting come from?
I swear you didn't have any on you a minute ago.
I believe you materialize bits of knitting out of thin air,
the way conjurors do with lighted cigarettes.'
'No,' said Susan, 'they grow out of my fingertips,
like a thread out of a spider.
As a matter of fact my whole inside is made of wool.
One gets like that, you know, living in the Highlands all year round.' 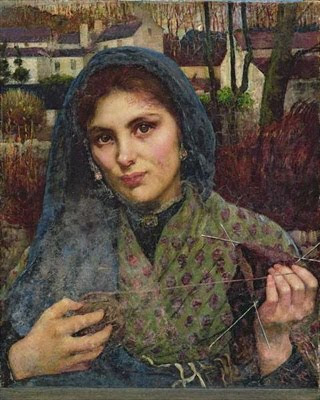 Mrs Miniver lay down on her side
to make the colours of the hills clearer.
Across the foreground of her picture
was a spray of whin in full bloom,
upon which two chaffinches were swinging.
Above them a pair of white butterflies were weaving
quick flirtatious patterns in the air.
It was idyllic - a Chinese painting on silk;
an exquisite, peaceful oasis in a day of organized death...
She shut her eyes,
taking the Chinese picture with her inside the lids.

'Listen,' said Susan presently.
'I heard a shot.'
Mrs Miniver opened her eyes again for a moment.
Eight white wings lay scattered on the grass under the gorsebush.
The chaffinches were looking as though
butterflies wouldn't melt in their mouths.
It was too hot to work out the moral.
She shut her eyes again and went to sleep. 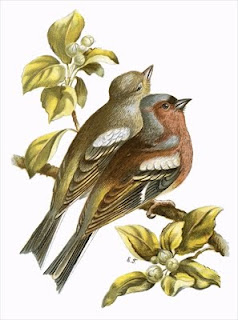 Chaffinches
English School 20th century.
Posted by Lucille at 7:00 am