We had an early visitation from carol singers tonight.

I was already Hoovering up the needles from our not-non-drop tree, 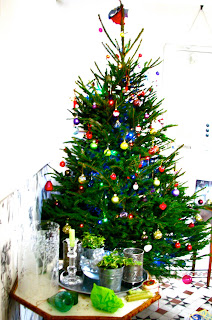 so I nearly didn't hear them.

They started with Rudolph the Red Nose Reindeer,
sung with some gusto.

Only one of them knew the words to We Wish You A Merry Christmas,

the other one was miming bravely but approximately.


There is a very special sort of facial expression needed
for carol singers when the freezing air is rushing through the open door and you are clutching a vacuum cleaner.
You can smile fixedly for the duration,
but you will soon tire,
you can sing along encouragingly,
but they may look put out,
and you may have to clap energetically as they draw breath for Siiilent Niight
otherwise you will catch pneumonia.
Ours ran out of repertoire quite quickly and as the fading bars morphed
with visible signs of relief into
a rather mechanical 'Haaappy Chriiistmas'
it was clear that it was my turn.
'That was lovely. Who are you collecting for?'
'Um,' said one of them.
The other one looked around for inspiration.
'Charity?' she said.
50p each seemed to be the going rate.


From Something to Do in December


The gates of the walled cities and towns of the Middle Ages were guarded by watchmen who were called waits. One of their duties was to sound the hours by playing a note or a simple tune on a wind instrument like an oboe. As many of the waits were musicians they gradually came to form bands which played on special occasions.
Later on, when cities had police forces, there was no need for watchmen or waits. But one of their duties had been to play songs for the Christmas festivals in the streets. This is why carol singers are sometimes called waits.
They still call at houses before Christmas, but mostly they are children collecting money either for themselves or some good cause.