It was a bitty day full of short bursts of activity
starting with an hour of Pilates
and finishing with yet another pair of broken glasses.

It took three trips to find a locksmith who could
cut new keys for me.
There was a very retro visit to a bank to pay in cheques,
to a real person behind a window.
I dodged into the dry cleaners twice,
took old medicines to the pharmacist to dispose of,
posted a cheque to the window cleaners,
because I keep missing them on account of being out on errands,
organised a headboard for the new bed,
tried to locate the owner of a membership card
found on the pavement and looking rather vital,
made enquiries of a specialist for someone whose son
has just been diagnosed with a severe peanut allergy in New York,
rang the shop that sells my candle cups;
she wants some more for Mothering Sunday,
found my usual good source of vintage cups, closed,
made unsuccessful forays into several charity shops
which aren't a patch on the thrift shops in the States
if blogs are to be believed,
but found three of these, which might do, 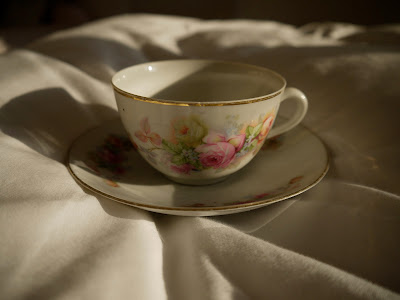 reverse parked badly into four parking spaces,
(as rare as hen's teeth where I live,
so you can't pass one up,
even if it is a cruel and risky challenge),
and then discovered after I had left one
that I was going to have to return
to the selfsame spot because my glasses fell apart
just as I arrived home.
On the plus side, I passed a display of these: 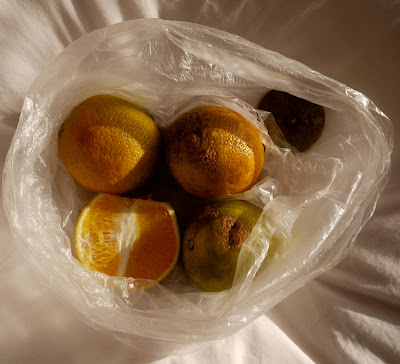 the mankiest looking Jamaican oranges
and recognised them for what they are -
pure gold.

Now I must address the urgent questions posed
in a 23 point document that has just pinged in.
I think it might have to wait.
My spare glasses really aren't up to it.