When I was 4 years 11 months old,
my Kindergarten report finished with the comment,

'Lucille is a very happy and busy little girl.'

Marjorie Butler, Froebel trained,
was the compassionate head teacher of the small school
I attended from 4 to 11
and I think I owe her a large debt of gratitude.

There was no National Curriculum in those days and
we benefited from an imaginative and unfettered approach
to our education which was conducted in tiny vertically grouped classes
in an old and characterful house called Eastwood.

According to Wikipedia, Friedrich Froebel coined the word
kindergarten (child's garden) in 1840.
He designed educational play materials
called Froebel gifts (wooden bricks and balls) and
advocated the importance of free play in childhood.
Each gift was designed to be given to a child
to provide materials for the child's self-directed play.
Directed activities included singing, dancing and gardening.
This all sounds incredibly modern and I was hardly aware
that these were the influences of my early years.

'The purpose of education is to encourage and guide man as a conscious,
thinking and perceiving being in such a way that
he becomes a pure and perfect representation of that
divine inner law through his own personal choice;
education must show him the ways and meanings of attaining that goal.'

I was certainly not explicitly aware of these lofty ideals.
It is the Nature lessons that I remember the best.
We had a Nature table and in season grew hyacinths,
germinated runner beans against blotting paper in jam jars,
brought in Chinese lanterns, watched pussy willow open
and displayed our own finds of conkers, shells, and tadpoles. 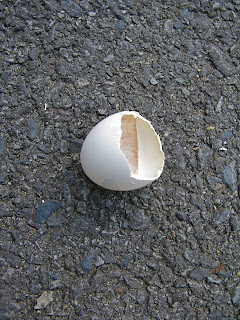 'Then there were all the little official rambles on the Common,
the gathering of wildflowers and grasses, of leaves and nuts -
even some tree climbing, during which we prayed hard;
and perhaps it was a chance in a million that we arrived
in our favourite field on the very day that dozens of six spot burnet moths
elected to emerge from their cocoons. We watched, fascinated,
and were able to take some home still stuck to their grasses,
for the very little ones to watch.'

Life Comes in at the Door - Marjorie Butler

This may be why I found the Brooke Bond Wildflower tea cards
so fascinating and important.
I collected them assiduously, stuck them clumsily in the albums
(6d from your grocer) and referred to them constantly. 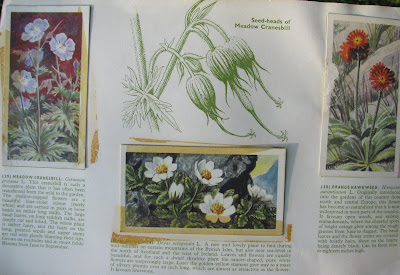 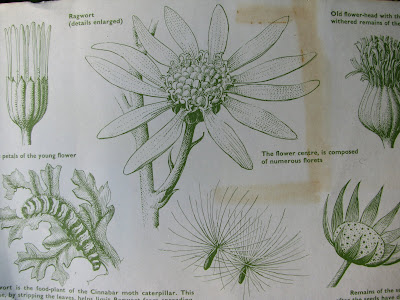 I remember all this as once again I fetch the trays and flower pots,
the compost and the seed packets

and embark with happy anticipation once again,
on the process
growing things for the garden.
Posted by Lucille at 9:24 pm