Milly-Molly-Mandy goes to a Party*

(if you are allergic to whimsy please pass)

Milly-Molly-Mandy had not been to a real party for a long time
so she was very pleased and interested when Mother said,
'Well, Milly-Molly-Mandy, you must have a proper new dress
for a party like this.
We must think what we can do.'

Mother went to the big wardrobe and rummaged in her bottom drawer
until she found a most beautiful white silk scarf,
which she had worn when she was married to Father,
and it was just wide enough to be made into a party frock for Milly-Molly-Mandy.

Then Grandma brought out of her best handkerchief box
a most beautiful lace handkerchief which would just cut
into a little collar for the neck of the party frock.

Aunty brought out some most beautiful pink ribbon,
all smelling of lavender - just enough to make a sash for the party frock.

Father bought her the most beautiful little pair of red shoes.

Grandpa gave her the most beautiful little coral necklace.

Uncle pretended he had lost his handkerchief and
pulled out of his pocket
the most beautiful little handkerchief with a pink border.

Lucille had an invitation to a party.
She had not seen some of these friends for over twenty years.
The invitation said please wear vintage black with a flash of red.
She wanted to go very much but oh dear -
she had no vintage black unless you counted her
old black gym T-shirt.

Her friend Maddy said,
'You can have my black party dress and my black cashmere jumper.'

Her friend Marian said,
'You can have my long black skirt with fringing.'

Her friend Rachael, said,
'You can have my black silk scarf.'

And this was very kind of all of them.
But Lucille thought it might be a good idea to have her own l.b.d
if at all possible, so she went shopping on a well known internet
auction site and 'won' this: 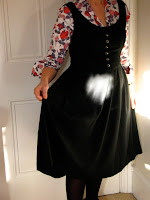 It was black wool crepe. It was 1950s vintage. And it fitted.
It was a pity that one of the buttons was missing.

She wore it with a twenty year old Liberty Tana lawn blouse
which she found at the back of the big wardrobe.
And then she pinned on the most beautiful little brooch
where the button should have been, 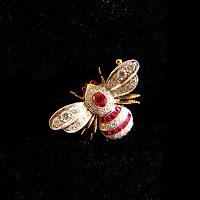 because nothing flashes like diamonds
and rubies are red.