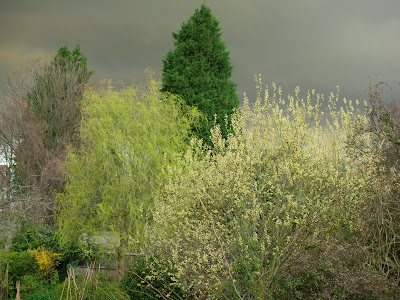 We've had some dramatic sunlit acid green foliage against pewter skies.
No rainbows, but it reminded me of this picture.

'In 1916 Laura Knight painted her large five foot by six foot canvas Spring,
now in Tate Britain It is a beautifully evocative picture of the Cornish countryside,
with brown moorlands in the distance shadowed by clouds.
The tops of the trees which line the meadows are about to burst into leaf,
tinged with pink and orange.
The rougher fields in the foreground are divided by banks of granite boulders
topped with ivy, yellow gorse and the dazzling white blossom of blackthorn.
The lambs in a field, a ploughman following his horse, swifts flying across the sky.
In front of this scene, bathed in a reddish-gold light, stand a man and a woman.
He is wearing the soft hat and deep pocketed jacket of a fly-fisherman
and carrying a rod. She is slender, dark-haired and graceful
in a white blouse and long red skirt, a striking black and red shawl over her shoulder.
Who are they, this Adam and Eve in the Garden of Eden?' 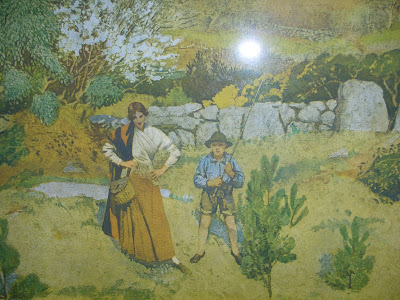 Who indeed?
In this old print I have of the painting,
the man is replaced by a small boy,
striking a similar pose.
Her coquettish stance and flirtatious sidelong glance are wasted on him!
It seems that the man was briefly painted out
and then reinstated after it was returned damaged,
from an exhibition in Pittsburgh.

John Branfield goes on to explain that they are Ella and Charles Naper.
She was a jeweller and he was an architect and painter.
They came to Cornwall to search for a way of life that
freed them from the conventions of society.

They had made a decision to care only about what mattered to them,
the enjoyment of nature,
the nurturing of friendships and the creation of beautiful things:
a home and a garden, jewellery, ceramics and paintings.
In the artist's colony at Lamorna they found what they were looking for.