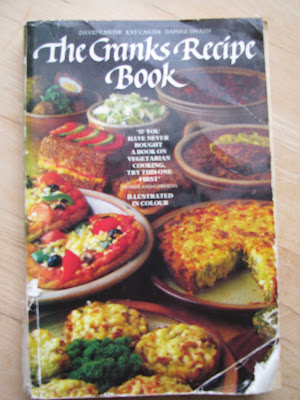 Gosh this takes me back-
brown food in gritty brown bowls,
rolls you could use as door stops,
hefty quiches, wholesome soups, and wild fruit juice concoctions -
most especially, the extravagantly named Tiger's Milk -
a Gaylord Hauser recipe.
He was the author of Look Younger, Live Longer.
The prospect of old age didn't trouble me then, but I must try this.
It is an improbable blend of fresh milk and orange juice (won't it curdle?)
with skimmed milk, Brewer's yeast and molasses.
Let's give it the benefit of the doubt. 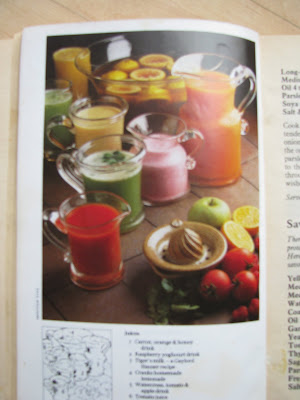 Crank's opened its first restaurant in 1961 at 22 Carnaby Street, London.
The menu was mainly salads,
but not the flaccid lettuce, cucumber and tomato combo
that 1950s Britain was accustomed to.
These were robust, vivid and fresh.
The crockery was handthrown stoneware from Ray Finch and his team at Winchcombe Pottery,
(and frequently nicked by customers.)
I acquired this one much later, unaware of his link with Cranks. 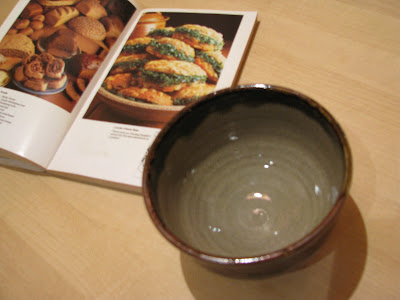 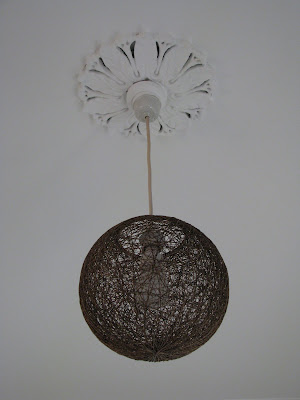 the seat covers handwoven.
Edward Bawden's drawings illustrated the first brochure.
This is a print of his Covent Garden woodcut. 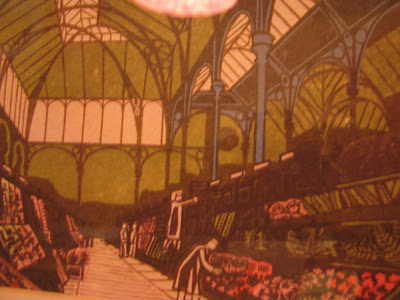 Determined that their three young children should not suffer the same ills as their parents,
David Canter and his wife Kay, the founders of Cranks,
committed themselves to natural unrefined foods.
This was long before organic foods were widely available.
The last remaining Cranks restaurant is in Devon,
but as long as I have the book I can recreate the vibe for myself
and anyone else who is interested.
We had the watercress soup for lunch today but this long neglected book has so much more to offer and Crank's Cheese Baps (awarded an Evening Standard award for the best sandwich in London) have to be next on the list.
And why was it called Cranks?
It was not because they considered themselves, as the dictionary puts
it, 'faddists', but because
'we wanted a label to show that with strong vegetarian and wholefood priciples, we were very different from orthodox retail and catering establishments and we wanted a light-hearted, humorous approach.'
The slightly blurry photographs are an homage to the production values of the day. Truly.