These glamorous but raucous birds have been breeding round the London suburbs since the 1970s and estimates suggest that the feral population is growing by 30% a year and will reach 100,000 by 2010.
We hear them and see them flying in small flocks over our garden,
but now they have discovered the feeder.
They take fright easily and usually there is a lookout who warns with a piercing squawk
when I approach . 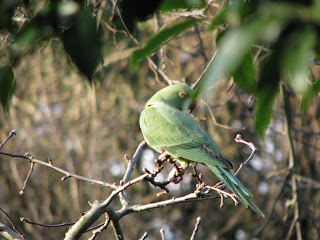 But today I was able to use the Bay tree as cover and got these pictures. 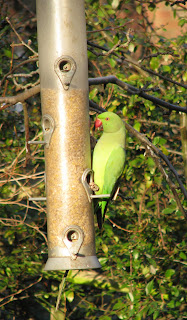 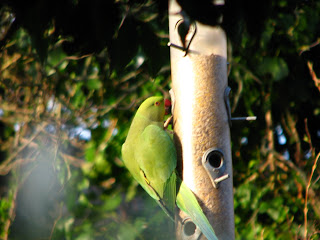 Ring-necked parakeets originated in the foothills of the Himalayas
so how did they get here?
One persistent theory is that an entire flock escaped from the set in 1951 during the filming of The African Queen,
starring Humphrey Bogart and Katherine Hepburn.
I hope this is true because it was my father's favourite film and he watched every time it came on television.
Posted by Lucille at 6:00 pm