If it's Wednesday it must be Milwaukee 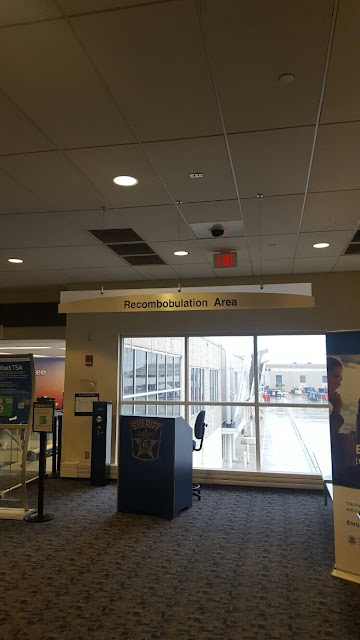 Brilliant sign sent by son from Milwaukee airport.
He was surely in urgent need of this facility
as he hurtled around the USA for his work this last week.
His thirtieth birthday was spent in transit.

Some recombobulating needed here too as I
think back to his first emerging in Arrivals.
His Emergency emergence indeed
after spending far too long in transit!

My own birthday was spent in hospital with him
where time stood still in a private room miraculously provided
by the NHS and filled with early Sweet Peas by my mother.

We brought him home after five days, in a carry cot
strapped onto the back seat of the car.
I remember that they gave me the little tin foil bowl
that they used to 'top and tail' him at bath time.
I clung to that bowl like a talisman until it wore out
and I realised that I would have to replace it with a bowl of my own
and that it would probably be alright.