Tootles the taxi and other rhymes

Today is National Poetry Day,
so I bring you some excerpts from Tootles the Taxi
by Joyce B. Clegg
illustrations by John Kenney. 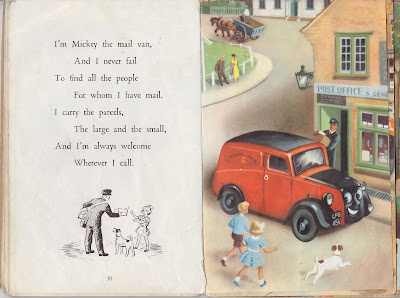 was my first solo outing.
It felt as though I had walked miles.
The responsibility of posting that letter weighed heavily. 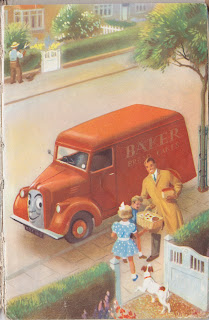 The verse that is missing from my edition  goes:
I'm Billy the baker's van,
Painted bright red;
I carry the sugar buns,
Pastry and bread.
I take all the orders
Round to each door,
And all of my customers
Come back for more!

We had just such a van calling at my primary school,
and the baker, clad in a brown overall, carried
an enormous wicker basket full of loaves.
He called me Lucinda which I found
simultaneously flattering and worrying.
The bread at home, two white bloomers,
was delivered by Michael on his bike
from O'Brien's the grocer.
The sugar buns were collected from the corner shop
at the bottom of the road.
That was my second solo destination
and I had a to buy a pot of strawberry jam. 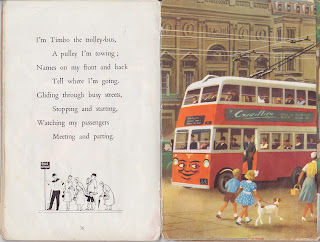 We didn't have a car so an inordinate amount of time
was spent waiting for trolley buses.
I have never had such cold feet again.
I remember the high banks of filthy snow at the kerbside
during the winter of 1963. 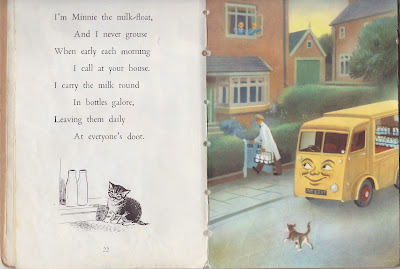 Our first milkman had to pull his trolley
which was a battery assisted cart.
I asked him to name a new doll and he said,
'Why not call her Mary Ann?' so I did. 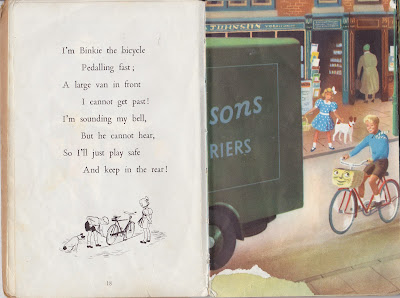 Learning to ride a bike was an all or nothing business.
No training wheels, no helmet, just
a swift push on the bumpy driveway
down a steepish slope and a messy crash
into a rhododendron bush.
Later I used to cycle round the block.
A girl called Pamela West waved from across the street
and invited me to tea.
I said I would have to go home and ask.
When I got back, she had disappeared
and I didn't have the nerve to knock at the door
of her large and silent house,
so I went home again. 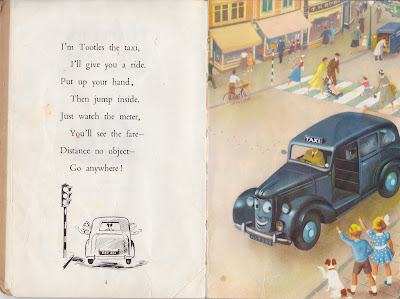 A trip in a taxi was a rare event
and certainly not a casual jaunt for lone children.
A man called Wallace was sometimes booked
to take us to the station when we went on our annual holiday.
The luggage had been packed in a huge tin trunk
and sent ahead of us to one or other seaside hotel,
sometimes Cornwall, often Bournemouth.
This meant dressing in very odd clothes until we left.
Goodness that sounds antediluvian. 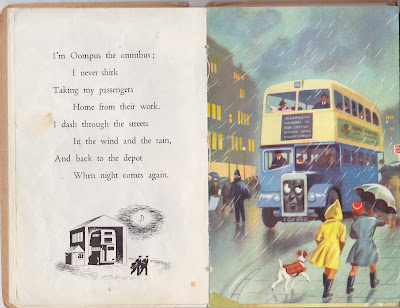 In fact we may well have stayed in school uniform
as the boys here and in Just William always seemed to do.