Looking up casually in the middle of writing a letter,
Mrs. Miniver saw, through the back window of the drawing-room,
something that she had never consciously seen before:
the last leaf being blown from a tree.
One moment it was there, on the highest bough of all,
wagging wildly in the wind and the rain.
The next moment it was whirling away across the rooftops,
a forlorn ragged speck.
The line of its flight was the arabesque
at the end of a chapter,
the final scroll under the death-warrant of summer. 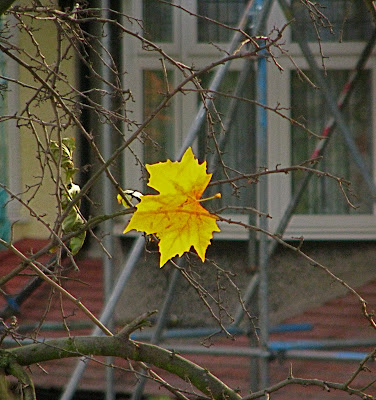 ...a few days before,
the weather had broken with a spectacular gale.
The old beautiful painted aristocracy of the leaves,
already tottering, had fallen in the night,
overthrown by outward pressure and inward decadence.
What remained were the essential masses of the tree,
bare and sober, with a workaday beauty of their own.
Through them, after a while, the sap would rise
into a new aristocracy, which would flourish until it, too,
had lost its freshness; and then fall.
There is no other way, it seems, in a deciduous world.
True evergreenness does not exist:
the word is only another term for the ability
to overlap the old with the new.


From Mrs Miniver by Jan Struther.