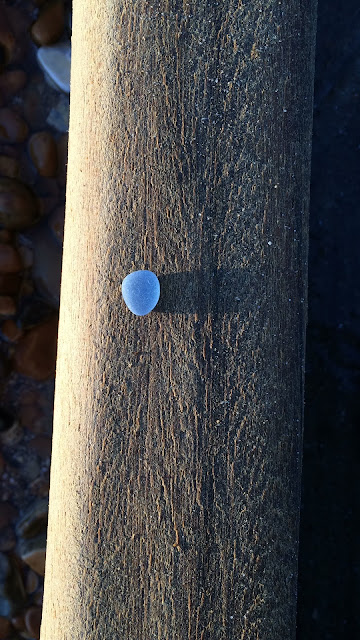 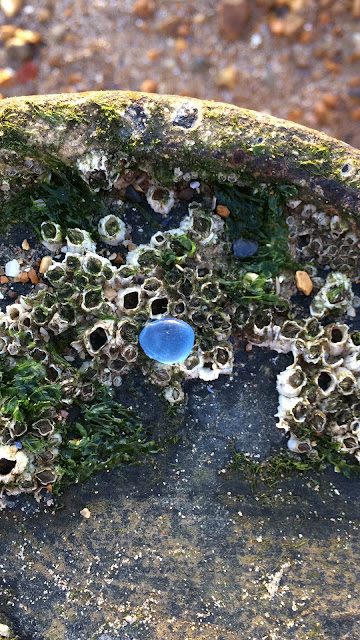 Our grand daughter was thrilled to be opening presents.
Anyone's presents.
The more the merrier.
The contents? Well they were not really the point of the exercise.
It was the moment of mystery that held her in thrall.

I received many lovely gifts too,
but the sighting of this blue glass gem on a beach that normally
only yields white and green was absurdly thrilling.
I felt as though I had won the lottery.

And yet and yet.
The glass once dry and cached with all the hundreds of other pieces indoors,
has lost some of its lustre.
The magical feeling of acquisition has faded.

Where does this pull towards possession come from?
It seems to start so early.
And the longer it lasts, the older I get, the more complicated it is
to shuck off the weighty legacy.

I had a waking dream nightmare, where I was trying to dispose mentally
of all the items in my house, as if in readiness for an imminent move
to somewhere much smaller than my present abode.
The practical difficulties seemed overwhelming.
And yet so many people have to do just this,
perhaps at a time when they are physically least able to cope.

My parents had a large house which easily swallowed
in its attics and outhouses
the baggage of a long lifetime, raising a family
and running a nursery school from the premises.
My mother was incorrigible.
'You'll have to deal with all this when I'm gone,' she said laughingly.

And when both parents died within five weeks of each other,
that is exactly what we had to do.
It was haphazard and brutal.
A skip was ordered and house clearance people got very lucky.
There simply wasn't time to make considered decisions.

Today I started my Kondo-ing again.

Labels: being satisfied with what you have, christmas, courage, dreams, jewels, Life, nursery school, out of my comfort zone, the Labours of Hercules