Whilst pondering the lowering effect of
this long winter on the nation's spirits,
I found myself wondering how much harder it must have  been
to stay cheerful during World War II,
and yet we are portrayed in newsreels as a resilient and
cheerful bunch even during the Blitz.
This British Council film is fairly typical:
http://film.britishcouncil.org/london-1942

The National Gallery in London had been putting on
morale boosting concerts by Myra Hess since 1939,
and visitors couldn't help noticing
the bare walls where pictures had been
evacuated for safety to Wales.
It was decided that the public should have access to
great pictures even in the most difficult circumstances.

Kenneth Clark said that the difficulties,
'must be weighed against the delight and refreshment
which the sight of a great picture would give'.
One picture was to be displayed every three weeks.

The Met Office weather report for February 1942
notes that the month was,
'remarkable for its persistently cold character'.
In England and Wales,
'sunshine was considerably below average on the whole;
in eastern districts it was particularly scanty'.

What did they choose for the aesthetic refreshment of Londoners?
Letters sent in by members of the public had made it,
'perfectly clear that people do not want to see Dutch painting
or realistic painting of any kind;
no doubt at the present time they are anxious to contemplate
a nobler order of humanity'.
They chose the newly acquired portrait of
Margaretha de Geer by Rembrandt. 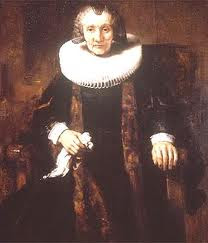 She was the wife of a wealthy merchant Jacob Trip
who had made his fortune from mining,
manufacturing iron and trading with armaments.
She was displayed each day between January and March 1942
and placed in secure storage each night.
On a persistently cold day in February 2013
I stood myself in front of her.
The gallery was quiet, it was near closing time
and most of the visitors had been
gently herded towards the exits.
We contemplated one another.
I could not honestly say I felt delighted.

In February 1943 they showed Constable's The Hay Wain. 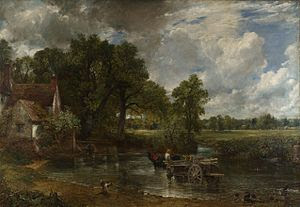 Next time I visit, I am going to have to make my own selection.
Which National Gallery painting would lift your spirits?