The Wilton Diptych, Turner's Helvoetsluys,
anything by Van Gogh, (I rather favoured
Still Life with quinces and lemons
in order to tempt Sue), and Velasquez's Crucifixion,
have each had votes so far.
Further nominations are for
The Graham Children by Hogarth and
The Madonna with the Iris by Dürer.

None of the downloadable images did justice to them
so I have scanned a postcard of my tentative choice.
Despite Clark's assertion that the public did not want to see
Dutch painting or any realistic paintings,
I see that in June 1942 they exhibited Pieter de Hooch's
A Woman and her Maid in a Courtyard
sadly not now on display, but I am frequently drawn to this: 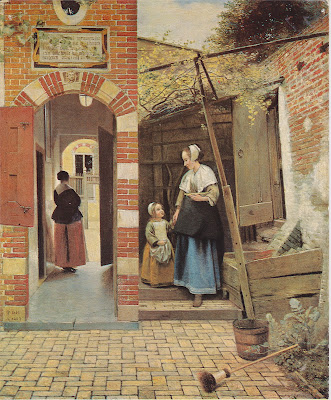 and I think that amid the chaos of bombed-out,
blacked-out London,
I would have been happier to contemplate sunlit order
than to wilt under the stern gaze
of Margharetha de Geer.

The inscription above the door translates as:
This is in Saint Jerome's vale,
if you wish to repair to patience and meekness.
For we must first descend if we wish to be raised.