It had been a lovely afternoon, thought Mrs Miniver
as they moved smoothly downstream between the low green banks.
In most parts of England this was the season of the year
that she liked least - this ripe, sultry time
when the trees were no longer jade but malachite,
and the hedges looked almost black against the parched fields... 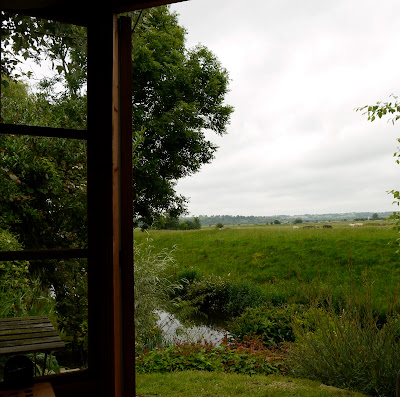 Summer was bathos, dégringolade:
one waited longingly for autumn,
which would bring back colour and magic.
But in this sort of landscape,
high summer was the perfect time.
Here, the grass of the water meadows was fresh, cool, and green;
the steady onward sweep of the river,
the quivering reflections in its depths
and the play of light on it surface,
gave movement and variety ... 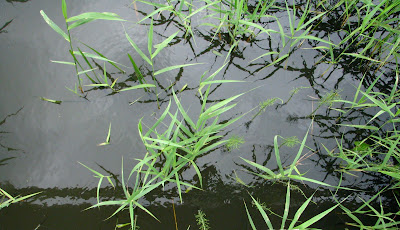 Even the rank and ramping vegetation of summer
(such a come-down, in most places,
after the delicate miraculous experiments of spring)
seemed here to be superbly appropriate,
like large jewellery on a fine, bold, handsome woman.
Down by the water's edge there were coarse clumps
of comfrey and fig-wort,
hemp agrimony and giant dock;
on the banks, a tangle of vetch and convolvulous,
moon daisies, yarrow, and bedstraw;
while from higher up still came
the heavy, heady sweetness of elder flowers. 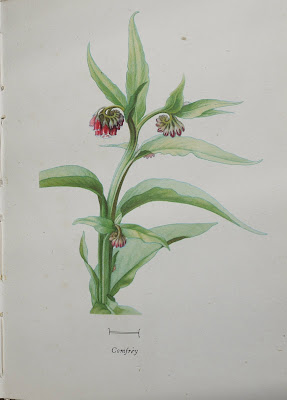 Comfrey from Flowers of Marsh & Stream
King Penguin by Iolo A. Williams

Moon daisies in my British Wildflower picture card collection
with its illustrations by C.F Tunnicliffe R.A  issued in 1964 and
'offered in the interests of education and wildlife conservation'
by Brooke Bond Tea.
Delving into a packet of fragrant loose leaf tea for the newest card
is a delight lost to present day children.
I had thirty-four of the fifty cards needed to complete the album. 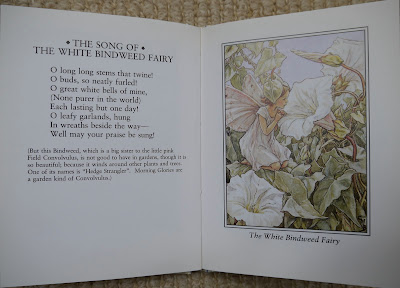 Convolvulous from
Flower Fairies of the Wayside by Cicely Mary Barker


Extract from Mrs Miniver by Jan Struther.
Posted by Lucille at 6:58 pm